⇐ Go back to Writing

Madhiya was almost at her favourite spot in the cemetery when she froze. A dark green tent had sprouted in the corner, behind the graves. It had not been there last week.

For the past year this had been her secret place, away from family and school. She visited every Thursday when she was supposed to be at hockey, to sit against the back wall and read. She liked to read the books by the people who were buried here: The Wind in the Willows, Cities in Flight, War in Heaven. The dead didn’t shout at her or call her names.  They told her stories.

But now someone else had moved in.

The path curved away, looping back to the church. Madhiya stepped off it, onto the grass and ivy, ducking under a tree branch. If she could work out who had put the tent here, she’d know what to do.

A red backpack lay on the ground, next to a rusted bicycle and an umbrella. The entrance was covered by a sheet of blue tarpaulin. The fabric quivered in the wind, or maybe someone was moving around inside.

Madhiya crept forward, to get a better view. She couldn’t turn back; she felt that she might run forever if she didn’t confront this intrusion. She’d lose the only place she could hide. A twig snapped under her foot.

Now there was only one row of graves between her and the tent: a dozen rectangles and crosses, blanketed in ivy. The tent squatted indifferently. The fabric was worn and ripped in a few places, as if it belonged to a tramp. She ought to tell someone about it.

A siren wailed in the distance, and Madhiya thought of the police coming here, packing up the tent, and arresting the person inside. They’d come in the night with bright torches and trample over the graves.

Would Kenneth Grahame object? How about Henry Quarterman, or Florence Wish? There was a list of the thirty-four most notable people buried here, near the entrance of the cemetery, but Madhiya had learnt some of the other names as well… such strange names. She was sure that Bertha Stainer would have been teased as well, even if she wasn’t the only Pakistani girl in her class.

Madhiya stepped back onto the path, no longer caring if she made a noise.

I’ll leave you alone, she decided. If you do the same for me.

She settled in a spot in the opposite corner of the cemetery, and took out her battered paperback. She’d been so happy to find it in Oxfam last week: another one of her authors’ books, to read here, in their final place of rest. She glanced back at the tent, then to James Blish’s grave, then back to her book. The title was printed in big yellow and blue letters: So Close to Home.

A wood pigeon cooed above her, deep and rhythmic, like a heartbeat. 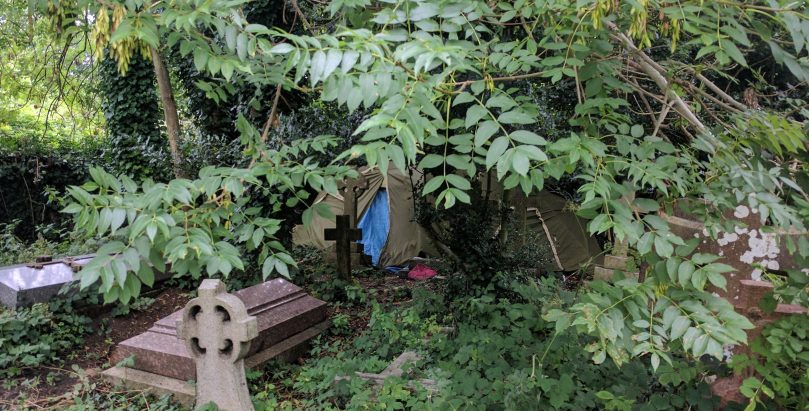