For my birthday last year my Dad took me to the Observatory Science Centre at Herstmonceux in Sussex. It was the site of the Royal Observatory between the 1957 and 1990, after it moved out of London to escape light pollution. Most of the buildings have since been converted into a science museum, but the six telescopes are still there, and on special open evenings expert hobbyists use them to look at the stars and planets.

I particularly wanted to look at Mars. I had been working on a Mars writing project for over a year, and for research reasons – as well as pleasure – my reading diet was almost exclusively Mars-based. I had come to know Mars pretty well. But I had never actually seen it.

Seeing Mars with my own eyes would, I hoped, bridge the gap that lay between my ideas of the place and its reality: between all the ideas and images drawn from fiction and non-fiction floating in my head, and the actual, solid, brute-fact of Mars.

Here I am in front of one of the telescope domes. There are six of these, topped in chemically-aged green copper, chosen to blend into the surroundings: 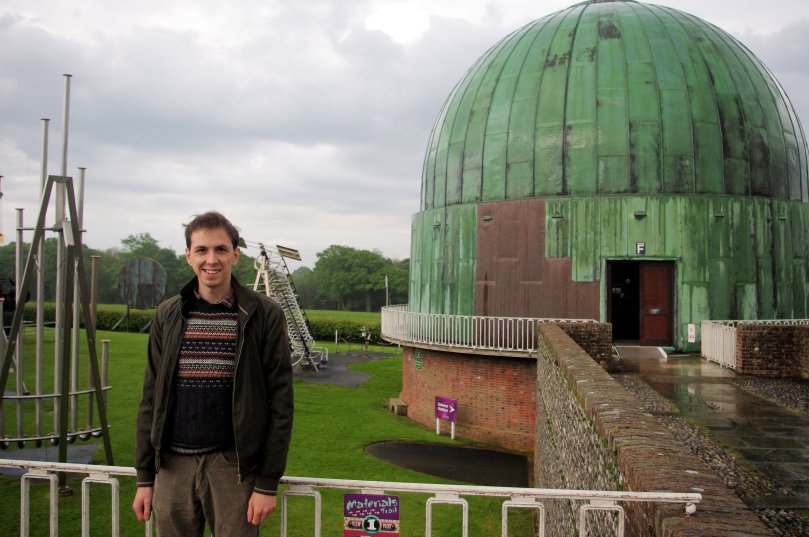 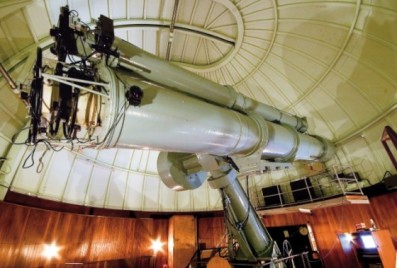 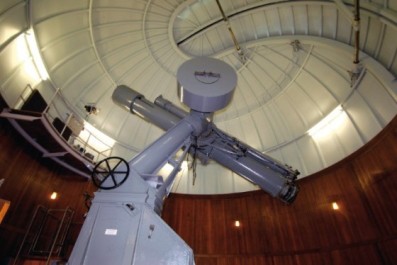 The only problem was the weather. In case the cloud coverage wasn’t clear enough in the above photographs, here’s another one in moody black and white: 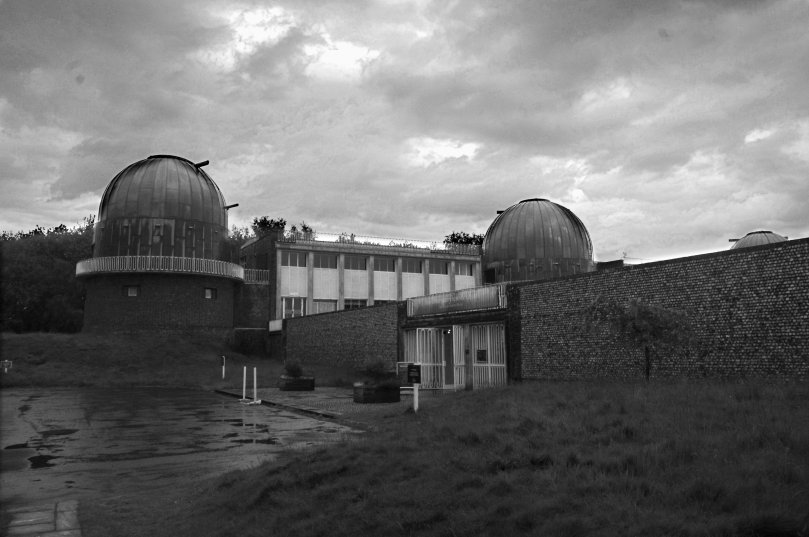 Cloud cover was the reason this place ceased to be a working observatory in the late eighties. Having escaped the lights of London, the observatory was defeated by the English weather.

Still, there was a planetarium show and lots of amateur astronomers to talk to, so it wouldn’t be a wasted three hour car journey from Oxford, whatever happened.

But then the heavens opened.

I don’t mean that it started to rain. I mean the heavens litterally opened up to us; as if someone had opened a door in the wall of cloud to show us a single white dot.

‘It’s Jupiter!’ someone cried out in the darkness, and we all ran into the nearest observatory dome.

One of the astronomers quickly made some adjustments and then let us look through the eyepiece in turn.

Now, this is the image I had in my mind of Jupiter:

That image is correct in that it accurately shows the shape of the planet and the patterns in its atmosphere. But looking at Jupiter through a telescope was a very different experience to looking at a photograph of Jupiter.

For one thing, you realise when actually looking at Jupiter how stunningly bright is is. This makes sense: after all, we can see it all the way from Earth, as a white speck in the sky.

But I had never before connected that speck with the red ball of gas I had seen in photographs. This was the missing link:

Imagine looking at that, but the ball part is brighter – brighter than the screen of your device could ever go – and  your eyes adjust as you’re looking at it, so at first you just see pale orange; then bands of darker orange, like vapour trails at sunset; then your eyes hurt because it’s so bright; and  then you think, holy shit I’m looking at weather on another planet, happening right now, literally in front of my eyes.

Kim Stanley Robinson writes about the brightness of Jupiter in Blue Mars (1996), when he describes colonies on the Galilean moons:

[…] whatever the length of their days, they all received during them only four per cent as much sunlight as the Earth. But the truth was that the amount of sunlight hitting the Earth was stupendously excessive, so that four per cent was actually a lot of light, when it came to visibility — seventeen thousand times as much as the full moon on Earth […] Lake Geneva and all the settlements on all the other moons were located facing Jupiter, to take advantage of the sunlight reflected from that giant globe in the sky; and flying ‘gas lanterns’ had been dropped into the upper atmosphere of Jupiter, clusters of them igniting some of the planet’s helium in points of light that were too brilliant to look at for more than a second […] Thus the banded monster ball was made an even more spectacular sight

Just because something is dim compared to the sun doesn’t mean it isn’t bright.

Another thing you realise when you look at Jupiter yourself is that it’s not alone. Jupiter has 67 moons (take that, Earth!) and you can quite easily see four of those: the same four that are colonies in Robinson.

I lent back from the  eyepiece and looked up through the gap in the dome where the telescope was pointed, at the tiny white dot in the middle of the tear in the clouds. Looking at it now, I knew that what I was seeing wasn’t a single white dot at all: it was multiple dots, multiple objects, squished together by vast distances into one speck.

The clouds reformed and the heavens closed. That word, ‘heavens’, seemed more appropriate than ‘space’ that night, when we were all focused on the presence of things above us, rather than the absence implied by the word ‘space.’ As C.S. Lewis wrote in Out of the Silent Planet (1938):

[T]he very name ‘Space’ seemed a blasphemous libel for this empyrean ocean of radiance in which they swam. […] He had thought it barren; he saw now that it was the womb of worlds, whose blazing and innumerable offspring looked down nightly even upon the Earth with so many eyes […] No: Space was the wrong name. Older thinkers had been wiser when they named it simply the heavens

Later that night the clouds parted enough for us to look at the moon. It was so bright you could only glimpse at it for a few seconds before you had to look away, and then you had a ghostly imprint on your retina for a few seconds more.

We went back to looking at clouds. I spoke to one of the astronomers outside a dome.

This was a good time to see Mars, astronomically speaking; it was the closest to Earth it had been for a decade, and should be noticeably brighter. If we could see it.

It was getting late, and people started to leave. Then, near midnight, the clouds cleared a little in the south and we saw a few more bright specks. One of them looked pinkish.

My Dad and I climbed into the nearest dome, where an astronomer was already moving the enormous telescope around to see if he could pinpoint Mars.

He kept losing it. It kept hiding its face behind cloud. We waited.

I took the opportunity to talk to him about astronomy. ‘What’s your favourite planet to look at?’ I asked.

‘Well, Jupiter’s the most spectacular, and Saturn has its rings, but for me, it has to be Mars. I just love the science-fiction. And it’s even better looking at it through this telescope, made in 1896. You get to look at Mars as the Victorians would have seen it: as H.G. Wells would have seen it when he wrote The War of the Worlds.’

The clouds parted again. The astronomer fumbled frantically with dials, muttering to himself.

Finally he looked up. ‘You can see it now.’

This is what I saw: 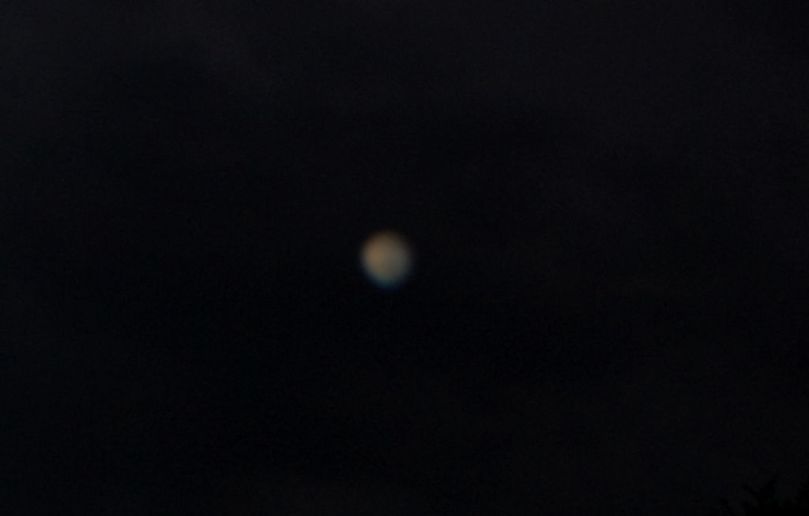 No Tharsis bulge; no poles; no patches of red and brown that might suggest vegetation or canals. But it was red, round, and undeniably Martian.

A more advanced telescope would have given me a clearer view, but it was – I agree with the hobbyist – a unique thrill to see Mars the way H.G. Wells would have seen it. In The War of the Worlds he describes the experience of looking through a telescope at Mars:

[…] the black and silent observatory, the shadowed lantern throwing a feeble glow upon the floor in the corner, the steady ticking of the clockwork of the telescope, the little slit in the roof—an oblong profundity with the stardust streaked across it. Ogilvy moved about, invisible but audible. Looking through the telescope, one saw a circle of deep blue and the little round planet swimming in the field. It seemed such a little thing, so bright and small and still, faintly marked with transverse stripes, and slightly flattened from the perfect round. But so little it was, so silvery warm, a pin’s-head of light! It was as if it quivered, but really this was the telescope vibrating with the activity of the clockwork that kept the planet in view.

As I watched, the planet seemed to grow larger and smaller and to advance and recede, but that was simply that my eye was tired. Forty millions of miles it was from us—more than 40,000,000 of miles of void. Few people realise the immensity of vacancy in which the dust of the material universe swims.

The observation about the planet seeming to change size certainly matches my own experience; it’s a strain to look at a fuzzy bright object so far away, and it does seem to shift in size and colour. The contrast between the brightness of the planet and the darkness in the observatory dome is also familiar. But the sound of clockwork, alas, is no longer there. Although the bulk of the telescope is the same as it was in 1896, the tracking system – which compensates for the fact that these planets are hurtling through space at enormous speed – is now electronic. It emits a low hum, charming in its own way, but not the same as a clockwork tick.

We went back to our Travelodge buzzing with excitement.

However, the Greek and Roman gods weren’t just powerful, mysterious and lofty; they were characters as well. They had personalities.

The planet Mars has a personality as well, in the same way that the sea does, or a mountain range. You feel a presence when you look at it.

Are we alone in the universe? Certainly not. We share it with the planets.